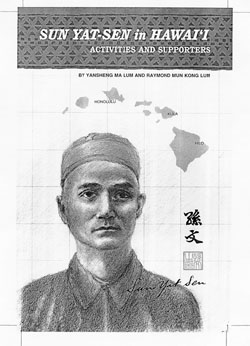 Dr. Sun Yat-sen, a great revolutionist, is well-known and highly respected by people of China and people all over the world. He was the Founding Father of modern China, the Republic of China. At the end of the 19th century and the beginning of the 20th century, he led the Chinese people in a revolutionary movement that succeeded in overthrowing the Manchu dynasty in 1911 and established a republic government. He was elected the First President of the Republic, thus bringing to an end to more than 4,000 years of imperial rule in China.

What is most unique is that Hawaii and its people played an important role in the life of Dr. Sun as well as in his revolutionary activities. As a teenager, Dr. Sun was educated in schools of Honolulu. As a revolutionist, Dr. Sun started his first revolutionary organization in Hawaii. The Hawaiians, especially those of Chinese ancestry, joined in the revolutionary organizations, contributed their efforts and funds and in many instances even their lives to China’s revolution. Dr. Sun once said: “overseas Chinese is the mother of revolution”. The Chinese in Hawaii is well worth the honor.

Born November 12, 1866, in the village of Choy Hang in Chung Shan County, Kwangtung Province in China, Dr. Sun came to Hawaii in 1879 when he was 13 years old. During his lifetime, he came to Hawaii six times and spent a total of more than seven years of his life in Hawaii, more years than in any other foreign countries he had visited.

Dr. Sun’s older brother, S. Ahmi (Sun Mei) came to Hawaii in 1871 and became a successful ranch owner in Maui. His success gave Dr. Sun the opportunity to leave his native village to come to Hawaii to study. From 1879-1882, young Sun Yat-sen studied in the Iolani School and graduated in 1882. While studying in Iolani School, he was rewarded a prize at a ceremony by King Kalakaua.

In January 1883, Dr. Sun enrolled for a semester at Punahou School, then called the Oahu College.

These early years of education had important influence on Dr. Sun as the seeds of western democratic ideas were planted.

In July 1883, young Sun Yat-sen returned to his native village.

Toward the end of 1884, on request of S. Ahmi, Dr. Sun returned to Maui. Earlier, S. Ahmi had put half of his property under his brother’s name, hoping that one day they might work together to develop a family business. However, S. Ahmi realized that his brother had no desire to be a businessman. So he requested him to relinquish his share of the property. Dr. Sun willingly did so. He left Maui and stopped in Honolulu on his way back to China. In Honolulu, his old friends Frank Damon and C.K. Ai helped him with money and other things. Dr. Sun went back to study medicine in Canton and Hong Kong and became a doctor.

In the meantime, a revolutionary tide to modernize China was surging forward in China and Dr. Sun was at the forefront. He rallied a group of young revolutionists in Hong Kong, Canton, and Shanghai, dreaming of starting a revolution.

In 1894, Dr. Sun returned to Hawaii. He talked about the need to overthrow the Manchu dynasty and establish a republic in China. Although only a small group of people were convinced by him, he succeeded in rallying 120-130 people and founded the Hsing Chung Hui (Revive China Society) in Hawaii. This was the first revolutionary organization that Dr. Sun started and it later evolved to become the Tung Meng Hui and Kuo Min Tang, the political party that established the Republic of China.

On November 24, 1894, The First Meeting of Hsing Chung Hui was held at the home of Ho Fon in Honolulu. 20-odd men attended. Later, more people joined. Those who joined paid US $5.00 as membership fee. In Maui, the Kahului Chapter (S. Ahmi as Chairman) and Paia Chapter (Teng Yin-nan as Chairman) were also founded. (Names of Hsing Chung Hui members were listed in the Appendices.)

Shortly after, in January 1895, Dr. Sun left Hawaii and returned to China to initiate his revolutionary activities in earnest. In Hong Kong, Dr. Sun set up the Hsing Chung Hui Headquarters and a resolution was made to stage the first armed uprising against the Manchu government. Unfortunately, their plan was leaked out and leaders of the uprising, Luke Hao-tung and others were arrested and killed. Dr. Sun fled to Japan and started his seventeen years of exile. The Manchu government put a price on his head and ordered its ambassadors abroad to spy on Dr. Sun.

The funding of the First Canton Uprising mainly came from the Chinese in Hawaii. Most Hsing Chung Hui members donated and some gave large sums of money. For instance, S. Ahmi sold some of his cattle to support the uprising. Teng Yin-nan sold his business, followed Dr. Sun to Hong Kong and donated money to buy weapons. A total sum of US $ 6,000 was collected from Hawaii to fund this uprising.

In early 1896, shortly after the Canton Uprising failed, Dr. Sun returned to Hawaii from Japan. First he went to Maui to spend sometime with his family. His good friend Luke Chan had helped Dr. Sun’s wife, Lu Shee and 4-year old son Sun Fo to come to Hawaii to escape persecution by the Manchu government. They lived in Maui with S. Ahmi. Dr. Sun was happy to meet again with his family and friends in Hawaii.

In Honolulu, he re-organized the Chinese newspaper Lung Kee Bao (The Hawaiian Chinese News) which was owned by Ching Wei-nan to be the official newspaper of the Hsing Chung Hui. The paper published articles expressing Dr. Sun’s political views. The office became a center where enthusiastic Chinese in Hawaii gathered and discussed issues about the revolution.

In June 1896, Dr. Sun left Hawaii for San Francisco and began his first visit to the United States mainland.

Sun Arrives Here Quietly–Man Who Would Like to Overthrow the Dynasty of the Empress Dowager and Her Mandarians”.

When Dr. Sun returned to Honolulu in 1903, he found out that many of his earlier followers were drawn into the Bow Wong Hui (Save the Monarch Society) organized by his rival Liang Chi-chao who advocated constitutional monarchy. This was controversial to what Dr. Sun advocated. So Dr. Sun made public speeches to explain the differences between his views and those of Liang Chi-chao. Dr. Sun won back support from most of his followers.

Dr.Sun re-organized the Hsing Chung Hui into Chung Hua Ke Min Jun (The Chinese Revolutionary Army) in Hilo. Many joined. In early 1904, the Chinese Revolutionary Army was organized in Honolulu. To raise fund for the revolution, Dr. Sun issued a “debenture certificate for military use”. The note was at US $1.00 and $10.00, “to be redeemed ten times after the revolution succeeds”. Many members bought the debenture certificate. Lum Chee from Hilo, (Raymond Lum’s father) kept originals of the certificates.

In 1905, when Dr. Sun was in Tokyo, he re-organized the Hsing Chung Hui and other organizations into a political party called the TUNG MENG HUI. This party spreaded all over China and rallied all the revolutionists under its wings. The revolutionary movement in China grew stronger and stronger. Tung Meng Hui members staged many armed uprisings, culminating in the October 10th Wuhan Uprising which succeeded in overthrowing the Manchu dynasty and established the Republic of China.

In May 1910, Dr. Sun left Honolulu. One and a half years later, the revolution succeeded. Dr. Sun was elected the Interim President of the Republic of China. However. the revolution in China did not end there. Dr. Sun had to start a second revolution against the warlords in China. All these years, he continued to solicit monetary support from his followers in Hawaii who continued to raise funds to support his revolutionary activities.

From 1895 – 1911, Dr. Sun organized ten armed uprisings against the Manchu government. To organize these uprisings, he needed funds for army payroll, weapons, ammunitions and other expenses. The overseas Chinese all over the world, in Southeast Asia, Japan, Europe, the United States, Canada and Hawaii, provided almost 80 per cent of the funds used to stage the ten armed uprisings. Dr. Sun issued “debenture certificates” in 1904 and 1907. He organized “the San Francisco Army Payroll Fund” in June, 1911.

The Chinese in Hawaii had always been generous in contributing. Lum Chee from Hilo had kept the originals of a cancelled check of donations of Hilo members, dated Feb. 19, 1904 and endorsed with the signatures of Dr. Sun and Ho Fon; originals of “debenture certificates for military use” issued in 1904; receipts of donations by Lum Chee dated Nov. 4,1907 and March 11, 1912; and originals of debenture certificates issued by the Chinese Revolutionary Party dated 1915. Copies of these historical documents are enclosed in the Appendix. These documents told stories of how the Chinese in Hawaii contributed to the Chinese revolution.

Dr. Sun’s supporters in Hawaii numbered in the thousands. Some were his family members, some his friends and some were members of the revolutionary organizations he founded. It was, of course, impossible to gather information of all that had followed and supported Dr. Sun. Many were unsung heroes. Moreover, before the revolution succeeded, it was dangerous to be involved in revolutionary activities. Many changed their names and many destroyed the documents afraid of being persecuted. More than 40 of the followers are listed (a few examples mentioned in the summary. Those who contributed to the Chinese revolution, whether their names are mentioned or not, will always be remembered.

2. TENG YIN-NAN, a Hawaiian businessman, sold his assets and followed Dr. Sun back to China to work for the revolution.

4. JACKSON HEE, an educator who established Chinese language schools in Hawaii, was a close friend and follower of Dr. Sun.

5. CHUNG MOOK HEEN, better known as H.A. Heen, was a successful entrepreneur in Hawaii. He sponsored Dr. Sun to join in the Ket On Society in Honolulu.

6. HO FON, an employee of Bishop Bank in Honolulu, was the Vice- president of Hsing Chung Hui and it was in his home that the first meeting was held.

7. LI CHANG, an interpreter in the Hawaiian Legislature, was an active member of Hsing Chung Hui and an editor of the Chinese newspaper Lung Kee Sin Bao.

11. YOUNG XIAN-Yi, a pilot and Young Ahin’s son, returned to China and worked for China’s airforce. Dr. Sun called him the “Father of Chinese Aviation”.

12. YOUNG KWONG-DAT, a Honolulu merchant, was the president of the Tung Meng Hui Hawaii Chapter and generously donated to the revolution.

13. LUM CHEE, a store owner in Hilo, was a member of the Tung Meng Hui and he kept some historical documents, including letters written and signed by Dr. Sun, a cancelled check, receipts of donations and debenture certificates Dr. Sun issued to raise funds.

14. CHANG CHAO and CHANG KING were brothers and they were Dr. Sun’s close friends. Dr. Sun stayed in their home when he studied in Honolulu.