The mission of The Foundation is to raise the public’s awareness of the important historical role Hawaii and its people played not only in the life of Dr. Sun Yat-sen, the acknowledged Father of Modern China, but also in the founding of modern China.

This role included his attending high schools at what are now known as Iolani School and Punahou School from 1879-1883, and later in the critical voluntary financial and manpower support he received for the revolution leading to the overthrow of the last emperor of China. The revolution brought an end to the Manchu / Qing Dynasty and culminated in Dr. Sun becoming the first provisional President of the Republic of China in 1912.

The Dr. Sun Yat-sen Hawaii Foundation was formed as a non-profit in 1997. It researches, chronicles, documents and exhibits the important historical links between Dr. Sun and Hawaii’s people and institutions who made many contributions supporting him in his efforts to modernize China. 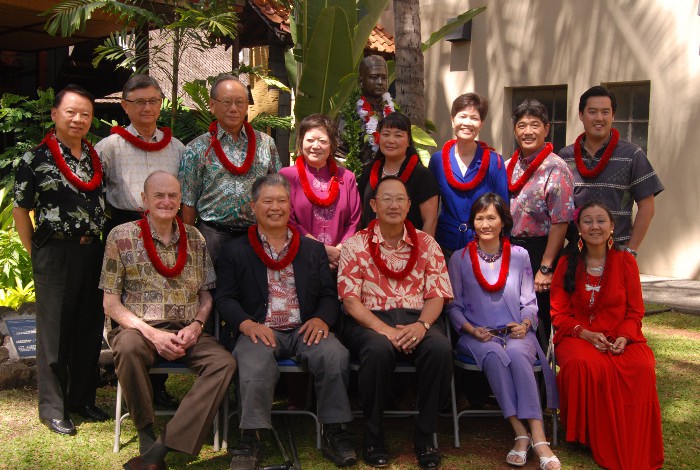 Steven Ai – President of City Mill, Ltd. His grandfather, Chung Kun Ai, was a classmate of Dr. Sun at ‘Iolani School and an early supporter and an active member of his revolutionary organizations.

Rosita P. Chang, Ph.D., CFA, CFP® is Professor of Finance and co-director of the Asia Pacific Financial Markets (FIMA) Research Center at the Shidler College of Business at the University of Hawaii at Manoa.  Her research has appeared in the Journal of Finance, Journal of International Business Studies, Journal of Financial Services Research, Journal of Banking and Finance, Pacific Basin Finance Journal, among others.  Her current research interests include financial literacy and issues related to the financial services industry. In addition, she has conducted commissioned studies for international institutions such as the Organisation for Economic Cooperation and Development, Securities & Futures Commission of Hong Kong, and several Asian stock exchanges.

Yen Chun – Experienced China business consultant. Emeritus Director of Chinese Chamber of Commerce. Trustee of the China Soong Ching Ling Foundation in Beijing and Shanghai. Yen is grand-niece of Dr. Sun Yat-sen and has been working closely with the Foundations in China on cultural and educational exchange projects.

Leigh-Wai Doo is the founding President of the Sun Yat-Sen
Hawaii Foundation and the Foundation for the Asia Pacific Center for Security Studies.  As a Honolulu City Councilmember, he led Hawaii in establishing its first Sister Relationships with PR China and became the first Honorary Citizen of the China Hainan Province and is the first recipient of the Hawaii State Bar Association Greeley Key Award.  He is descended from Naturalized Citizens of The Kingdom of Hawaii, later Americans, who helped shape the history of China and America.

Mangmang Qiu. Esq. has 30 years’ professional experience in international exchange and programs, in law, business and education.  A licensed attorney, she is currently the Senior Director for Development and Global Initiatives at the Hawaii Pacific University.

Kenneth Chong – Real estate developer and consultant, and past President of the Chinese Chamber of Commerce (1996). His areas of activity include affairs concerning China-U.S. relations and Hawai’i’s Chinese Community.

Robert Lees – Executive Adviser, Asia and the Pacific for BearingPoint.

Carolyn Luke – Granddaughter of Luke Chan, a close friend and supporter of Dr. Sun who helped bring the Sun family to Hawai’i after the first Canton Uprising failed.