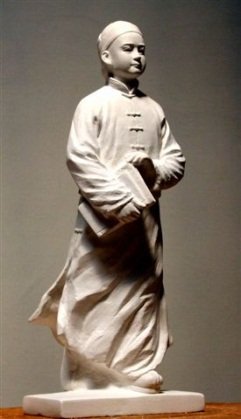 “This is my Hawaii… here I was brought up and educated; and it was here that I came to know what modern, civilized governments are like and what they mean.”
– Dr. Sun Yat-sen

In 1879, at the age of thirteen, Sun Yat-sen came to Hawaii from Zhongshan, China.  It was here in Honolulu, that he spent many of his teenage years growing up and being educated.  China’s first revolutionary society the Xing Zhong Hui (Revive China Society) was organized in Hawaii in 1894.  Sun Yat-sen went on to overthrow the Qing Dynasty and establish a democratic China in 1911.  The dedication of this statue recognizes the sacrifice and support of the people of Hawaii in nurturing the roots of “Modern China” and its Founding Father.
– The Dr. Sun Yat-sen Hawaii Foundation
November 12, 2007

On November 12,2007 the Dr. Sun Yat-sen Memorial Park was dedicated in Honolulu, Hawaii commemorating the support and influence that the people of Hawaii had on the life of Dr. Sun.

To Honor of the occasion, the Sun Yat-sen Hawaii Foundation commissioned “A School Boy in Hawaii”, a Bronze statue created by Master Chu Tatshing, depicting Dr. Sun at age thirteen.

The statue was made possible by the following Benefactors: